Use the System Monitoring page under Scheduling & Alerts object in the tree to make changes and create new rules.

A rule has the following structure:

The action can consist of several statements – they have to be separated with a semicolon.

You can enable or disable certain rules right on the System Monitoring page.

The Edit rules button lets you edit the monitoring rules in your browser.

The above rule executes every 10 minutes (delay), and checks the condition MemUsageAboveFor. In the above scenario, if the memory utilization is above 70% for 20 minutes or more, the condition becomes true, and action1 is executed.

The action, in this case, will send an email to administrator@company.com describing what has happened. The rule will keep checking the condition every 10 minutes after the condition has become true. If it’s still true, it does nothing – but if it becomes false (that is, the emergency situation is resolved) it executes action2. In that case, ExpertAssist will email the administrator to let him know that the problem has been resolved.

When log entries matching a certain criteria are entered into any of the event logs you can have ExpertAssist send you email alerts to an email address of your choice.

Email alerts will not work until you configure your SMTP server under Preferences > Network.

Once you've set that up, you can configure email alerts according to the following criteria:

Type in the source of the message you want to be alerted on. For example, Security, Disk, etc. This field is optional.

Type in the category of the message as it would appear in the event log. This field is optional.

The email address the notifications are sent out to. You can only specify a single email address per entry, so if you want several people to receive these messages you should specify a group alias here.

The Task Scheduler gives you a simple interface to NT’s Scheduler. In order to be able to view, add and delete tasks, the Schedule service must also be running.

On the main page, you can see a list of all currently scheduled tasks. The table shows you the following:

Select it and click on the Delete button in the toolbar.

To add a new scheduled task:

To view/modify the attributes of your existing tasks:

To download a CSV file containing the currently displayed table of scheduled tasks available on the remote computer:

This page in ExpertAssist provides an extension interface in which you can create custom PowerShell scripts that interact with the remote system, ExpertAssist and the remote user.

ExpertAssist comes shipped with a set of scripts that allow you to perform some typical administrative tasks on the remote computer. You may use them as a basis for your custom scripts, or you may create your own scripts from scratch as well.

There are three kinds of scripts you can create:

Interactive scripts display their output on HTML pages, returning script output back to your right within the ExpertAssist’s Scripts page. An example for an interactive script is the File.ps1 script, which is installed with ExpertAssist. These scripts do not have to return a value from their main function. They communicate with the user via the htmlBeginOutptut(), htmlEndOutput().

A Quiet script is one that is usually called from the System Monitoring script. It does not display output. A return value is required at the end of the main function.

A skeleton example for a Quiet script is here:

This script does not do anything useful. It simply sets the $POWERSHELL_RES variable to 1, meaning that a problem has occurred.

Hybrid scripts, on the other hand, are executable interactively and also return a value at the end of their main function. Hybrid scripts check the return value of the htmlBeginOutput() function, and if it’s a zero value, the script is run in non-interactive mode.

See the MonitoringScript.txt file in the ExpertAssist program folder for an example.

For the PowerShell scripting language reference, please see the Owner’s Manual available for downloading at http://www.microsoft.com/technet/scriptcenter/topics/winpsh/manual/default.mspx.

To run a script:

Click the script's Run icon to execute it immediately. ExpertAssist will show the notification message on the Scripting page during the script runtime to indicate that the script is being executed on the remote computer.

Figure 14: The script is being executed. 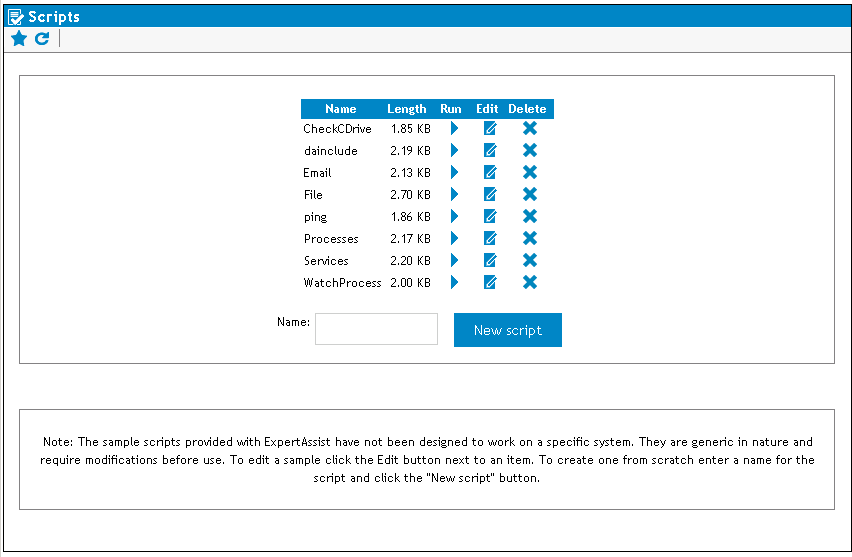 The Length column shows the size of the PowerShell script.

To edit and save changes made to the PowerShell source code of the script:

The Delete command removes the script. Confirm script deletion by clicking OK in the message box or click Cancel to skip deleting the script.

Deleting the script will permanently delete the script *.ps1 file from the remote computer!

To create a new script, enter its desired name in the Name field and click the New script button.

Suppose, you want to create a script that will check to see the printer drivers available on the remote computer to help you troubleshoot printing errors. Of course, you would like to have this script output the results back to you elegantly wrapped in a table.