NOTE: If upgrading from a LiteSpeed version prior to 6.x on an active/active cluster, please uninstall that version on all nodes of the cluster.

LiteSpeed can also be deployed silently via a deployment tool such as SCCM or LANDesk. In a mass deployment, the steps are as follows:

To setup the package for deployment create a distribution package in your deployment tool.

In the command line, specify "silentphase=0" to cause Instance Configuration not to be run. You can customize the installation by creating an MSI transform and by using the TRANSFORMS=MyTransformName.mst command-line parameter for MSI package.

The package should be set to run in silent mode with no user interaction and to suppress any reboot. Separate packages need to be set up for x32, and x64 systems. 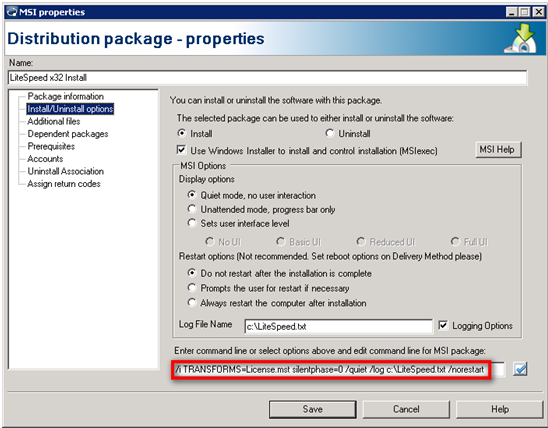 Once the package is setup create a distribution task and deploy the .msi to the cluster nodes.

Create the XML files for the servers

You can configure LiteSpeed on the remote server instances using the Remote Deploy wizard, or by logging into the server and manually running Instance Configuration.

Also, this process may be automated by using WMI and PowerShell. LiteSpeed dev team created a PowerShell script to facilitate LiteSpeed remote configuration.

The script takes a folder that contains all the remoteinstall_computername.xml files and copies each one to the individual server and then executes Instance Configuration with the given configuration file. Some of the script features are: