To generate an event for InTrust to process, a data source script should do the following:

The CreateEvent() function does not have any arguments. Use the function as follows:

After making the event accessible through a variable, you can fill in the event fields with values. The fields can be either predefined or created "on the fly". By convention, the names of some predefined fields start with underscore characters (_). Such fields should not be edited.

The predefined event fields are listed in Event Fields.

The following is an ECMAScript example of field-processing operation:

myEvent.Values("MyField") = "myValue";
// Creates and fills in a custom field

Before you submit an event from a script in ECMAScript, make sure the TimeWritten and TimeGenerated fields are set.

Like CreateEvent(), the Submit() method does not take any arguments. Use it as in the following example:

The events that scripted data sources submit are passed on to real-time monitoring rules or cached.

The audit script object model is exposed by the script engine to the scripts.

The audit script position processor is the object that executes the position comparer script.

The script can use the following methods to output diagnostic information:

For details about the InTrust object model, see Object Library.

Filters on data sources are defined for gathering, consolidation and import policies; these filters can be customized using REL. 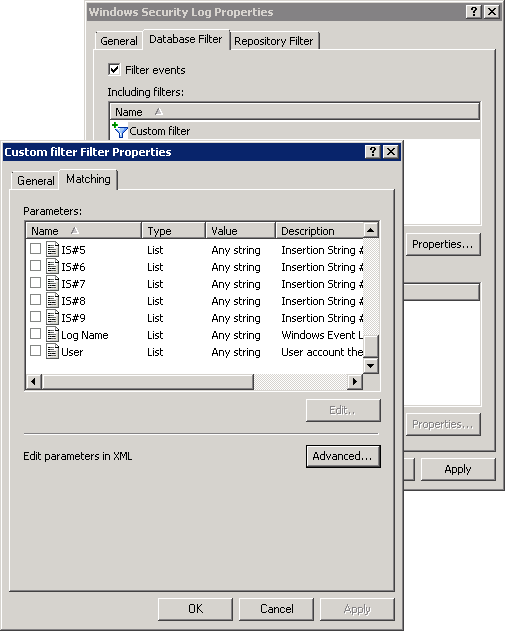 The following is an example of a simple filter:

In this example, the filter accepts events only from a specific (case-insensitive, wildcard-enabled) list of computers.

For details about defining parameters, see Customizable Parameters. For a list of predefined event fields that you can filter by, see Event Fields.

The following table lists predefined fields in event records. When you create an event, do not modify any of the bolded fields.