Below are some brief overviews surrounding some of Quadrotech Nova's features.

In order to use Quadrotech Nova by Quest, users must have at least one of the following Office 365 Licenses:

If people won't actually use a service, there's no point in having it. You won't reap any benefits. Successful implementation of Office 365 depends on user adoption. For example, when Microsoft Teams replaces Skype for Business Online, you can on-board users and get them familiar with the new platform. However, if they don't start actively using Teams for their collaboration, then the transition is going to be disruptive since you'll have to eventually force them to use the new service.

Having insight about who's using Office 365 services means you can anticipate user adoption issues and plan for them. Native Office 365 tools show you how licenses are allocated, and some basic information about how they're being used, but there isn't significant detail, and there aren't tools to support user adoption initiatives.

The Nova Adoption Accelerator allows you to define adoption goals and track progress against them. Here's how it looks when you check the progress of an existing adoption campaign: 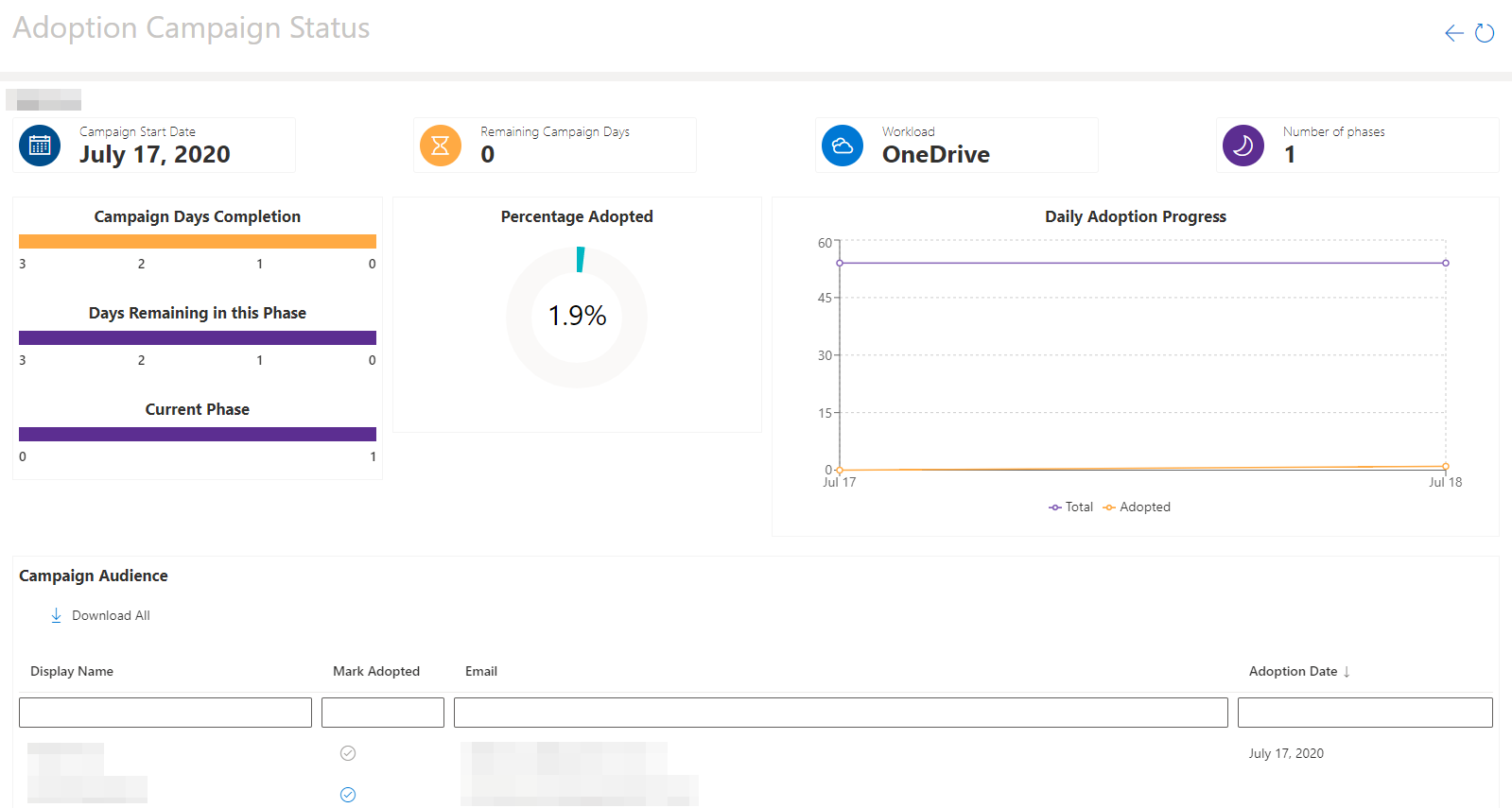 When you set up a new campaign, you're prompted to set adoption goals and a collection period. These settings are used to analyze whether users are adopting the new workload. Here's how it looks:

Before you set up a new campaign, you'll want to:

·Determine how you'll measure whether users have adopted the workload. What are your goals? (See the Adoption Goals section above.)

·Decide which users you'll track. Will you track everyone or only certain departments? Will you use a static list of users or will you adjust your list if people leave or join the organization during the campaign?

How to Create a Campaign

4.Identify the number of phases of the campaign. For example, you might have 3 phases broken down like this:

·Phase 2: Provide more information to get users active in the workload.

·Phase 3: Provide details about corrective action to get users active in the workload.

5.Specify the time period you want to use to measure campaign progress. See the Adoption goals section above for more information.

6.Add goals and specify how many times you want users to perform specific actions during the collection period. See the Adoption goals section above for more information.

8.Define your audience type and any filters. Here's more about the Audience Type options:

·Dynamic: The group of users tracked as part of the campaign changes as people join and leave the organization.

·Static: A group of users is captured on the first day of the campaign and that list doesn't change throughout the campaign.

Follow the steps below to view, edit, or delete an existing campaign.

2.If desired, sort/filter the list of campaigns and locate the desired campaign.

Here is an example of how you would use Adoption Accelerator.

Your organization wants to move communication platforms and believe Microsoft Teams has the best set of features that suit your users' needs. You are beginning the transition from another piece of communication software and you think it would be beneficial to get data on which users are being integrated well into Teams, and which users may need further support. Ideally, you would like the transition period (campaign date) to be around three months, and would like the campaign to happen in three phases with three adoption goals.

·Phase One: To ease your new users into Microsoft Teams, you may want to track the Private Chat Message Count from your users within the first couple of weeks to see who has began using Teams.

·Phase Two: You may be hoping to see collaboration within your departments, so defining an adoption goal around Team Chat Message Count is the best method to track this.

·Phase Three: By this point, you are hoping that your users are now mostly communicating with Microsoft Teams. This would be a good point to see the overall scope of your adoption campaign with Total Activities.

After your campaign has finished, you then have the opportunity to see who has been fully integrated into Teams and who may need further support.

The User Interface allows you to:

·toggle between hiding and showing campaigns no longer active.

·filter campaigns by their name. Search for the reports you want to see.

·group campaigns that you see in the UI. Sort campaigns by either workload (Teams, OneDrive For Business etc.) or status (ongoing or completed).

An example of Adoption Accelerator's User Interface can be seen below: