You can set up one machine as both the NetVault Backup Server and the SQL Server®, that is, all software installation and configuration requirements are performed on a single machine. However, Dell recommends that these two entities exist on separate machines.
Figure 1. Standalone deployment 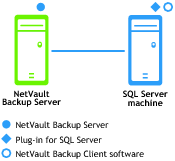 SQL Server Failover Clustering (Active/Passive) provides high-availability for an entire SQL Server Instance. For example, you can configure a SQL Server Instance on one node of a failover cluster to fail over to a different node in the cluster during a failure or planned upgrade.
A failover cluster is a combination of one or more nodes (hosts) with two or more shared disks, known as a resource group. The combination of a resource group, its network name, and an IP address that makes up the clustered application or server is called a Virtual Server. A Virtual Server appears on the network as if it were a single computer, but provides failover from one node to different node if the current node becomes unavailable.
Using the failover cluster network name, the Plug‑in for SQL Server identifies the current node that is in control of the SQL Server Virtual Server and targets it for backup.
Make sure that you use the same Windows Server® to host the Cluster Core Resources group and to take the active role. The Cluster Core Resources group contains the IP address, network name, and the disk witness. For the Virtual Client to function correctly, the Windows Server that hosts the Cluster Core Resources group, that is, the host identified as the Current Host Server, must be the same node that holds the active role. If failover occurs and the active role moves to a different host but the Cluster Core Resources group does not, the Virtual Client cannot access the active host. The Virtual Client must resolve the IP address for the cluster to the server that takes the active role.
If necessary, such as after a failover occurs, use Windows PowerShell® or a command prompt to move the Cluster Core Resources group to the active host.
PowerShell example: Move-ClusterGroup "Cluster Group" –node <ClusterNodeName>
Command prompt example: cluster group "Cluster Group" /Move:<ClusterNodeName>

You can use the plug-in with the AlwaysOn Availability Groups that you have created on top of your WSFC cluster. In addition to backing up data, you can use the plug-in to manage the addition and removal of the primary and secondary replicas during a restore process. This option eliminates the need to use SQL Server Management Studio to add and remove the replicas.
To ensure that the plug identifies a Virtual Client as running on an AlwaysOn Availability Group, you must enter valid credentials for the All Instances node located under the applicable Virtual Client in the selection tree. The credentials must let the plug-in log in to at least one SQL Server Instance that is a member of the group. For more information, see Configuring the plug-in.
Figure 2. AlwaysOn deployment 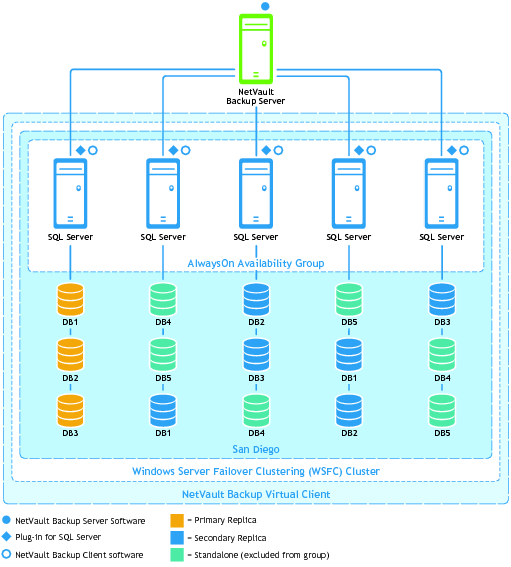