The DR Series system hardware consists of a total of 14 drives. Two of these drives are 2.5-inch drives that are configured as a Redundant Array of Independent Disks (RAID) 1 on the RAID Controller, and this is considered to be volume 1. On the DR4000 system, these drives are internal; while in the DR4100, DR6000, DR4300e core and standard, DR4300, and DR6300 systems, these drives are accessible from the rear of the appliance. The data that is being backed up is stored on the 12 virtual disks that reside on the DR Series system. The DR Series system also supports additional storage in the form of external expansion shelf enclosures (see the DR Series Expansion Shelf section in this topic). The hot-swappable data drives that are attached to the RAID controller are configured as:

The DR Series system supports RAID 6, which allows the appliance to continue read and write requests to the RAID array virtual disks even in the event of up to two concurrent disk failures, providing protection to your mission-critical data. In this way, the system design supports double-data drive failure survivability.

If the system detects that one of the 11 virtual drives has failed, then the dedicated hot spare (drive slot 0) becomes an active member of the RAID group. Data is then automatically copied to the hot spare as it acts as the replacement for the failed drive. The dedicated hot spare remains inactive until it is called upon to replace a failed drive. This scenario is usually encountered when a faulty data drive is replaced. The hot spare can act as replacement for both internal mirrored drives and the RAID 6 drive arrays.

The DR Series hardware system appliance supports the installation and connection of Dell PowerVault MD1200 (for DR4000, DR4100, and DR6000) and Dell PowerVault MD1400 (for DR4300e core and standard, DR4300, and DR6300 systems) data storage expansion shelf enclosures. Each expansion shelf contains 12 physical disks in an enclosure, which provides additional data storage capacity for the basic DR Series system. The supported data storage expansion shelves can be added in a variety of capacities based on your DR Series system version; for details, see the DR Series System Interoperability Guide.

Understanding the process for adding a DR Series expansion shelf

The process for adding an expansion shelf requires the following:

As an example, this section and the following figures display the recommended method for cabling between the DR Series system’s PERC controller card to the appropriate connectors on the rear of a Dell PowerVault MD1200 expansion shelf enclosure.

Make sure that the Dell PowerVault MD1200 front panel selector switch is set to its Unified mode (with the switch set to its “up” position, indicated by a single Volume icon). The first figure below shows the SAS In ports on the Enclosure Management Module (EMM) on the rear of the Dell MD1200. The next figure shows the recommended redundant path cabling configuration, which includes cable connections from both PERC H800 connectors on the DR4000 system (or the PERC H810 on a DR4100/DR6000 system) to the two SAS In ports on the EMM rear chassis of the Dell PowerVault MD1200.

If you plan on installing multiple expansion shelf enclosures, then the two SAS In ports on the rear chassis of the EMM on the additional enclosure are daisy-chained to the two SAS Out ports on the EMM rear chassis on the first enclosure. This is considered a redundant mode connection via the SAS In/Out connectors on the enclosures with the DR Series system appliance. 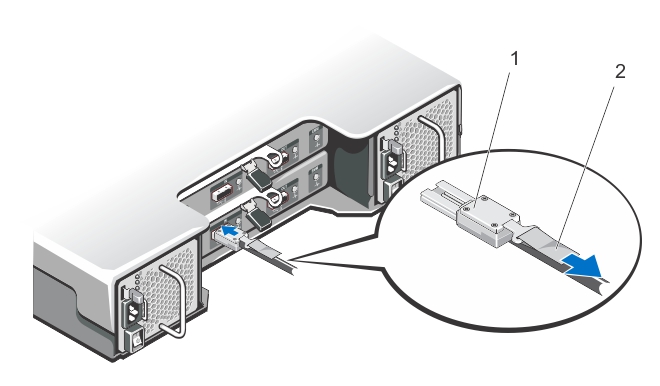 For a complete list of the latest supported software and hardware for the DR Series system, refer to the DR Series System Interoperability Guide. You can download this guide by visiting support.quest.com/dr-series, selecting your specific DR model and then navigating to Technical Documentation.

Setting up the DR Series system

Setting up the DR Series system

You can interact with the DR Series system hardware using one of two supported methods: the system graphical user interface (GUI) accessed in a web browser or the command line interface (CLI) accessed by using a terminal emulator application (for example, PuTTY). Before you can interact with your system, you must first, however, ensure that the DR Series system is properly set up.