In Toad Edge, snapshots are a way of storing database structure (without data) as a readable JSON file. This file can be subsequently used as a create script source or as a Schema Compare source/target in Continuous Integration and Delivery (CI/CD).

There is also another type of snapshot - baseline snapshot. It is nearly identical to regular snapshot except it can be used in CI/CD in the Compare database with baseline build step. This build step will return an error if the database is different from the baseline snapshot. See Continuous Integration and Delivery Wizard for more information.

To take a snapshot of a database 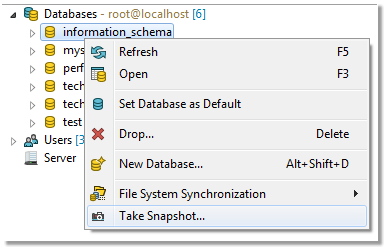 Snapshots are stored in the Toad Edge folder structure. You can access the snapshot files in Snapshots View.

Templates are script snippets that can be reused in various editors. In Toad Edge, templates can be defined in three contexts:

The subsections below explain the various user privilege views provided by Toad Edge®Edge and their management w.r.t to an object or an user.