Use the qstatus command to view statistics for the capture, post, and export queues on any system. It displays the number of messages in each queue, their age, and the current size of the queue. Typically, a message approximately corresponds to a SQL operation, but there can be multiple messages for one operation on a LONG or LOB column, and there could be just one record for numerous operations of an array insert. A message also can be an internal SharePlex operation.

When to use the qstatus command

Use the qstatus command to:

Use the quit command to close the current session of sp_ctrl. Closing sp_ctrl does not shut down replication; all replication processes continue without interruption unless they have been stopped by a user. This command merely discontinues your session with sp_ctrl on that system. To run sp_ctrl again, change to the directory containing the SharePlex binaries and enter the ./sp_ctrl command (for Unix and Linux systems) or double-click the sp_ctrl shortcut (Windows systems).

There are no [on host] options for the quit command. It must be issued on the system where you want to stop running sp_ctrl. This command is the same as the exit command.

Use the reconcile command as part of a procedure to synchronize (instantiate) source and target data with minimal interruption to the database users. The reconcile command coordinates the results of ongoing replication with a copy of the source data that is applied to the target system, such as that applied by a hot-backup or a native copy utility. The reconcile function compares the replicated changes in the post queue with the state of the target database after the recovery process. It differentiates between the transactions that were applied during recovery from those that have not yet been applied (still waiting in the post queue), and it only posts the non-duplicated changes so that both systems are synchronized. 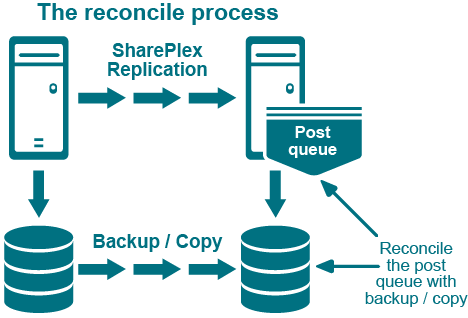 Considerations when using the reconcile command

Use the redo command to execute the previous command again without having to retype it. This command is useful when you are making frequent status checks with the information commands, for example using the qstatus command to monitor changes in queue volume.

This command only can be issued from within sp_ctrl; it cannot be issued directly from the operating system’s command line. There are no [on host] options for this command.

SharePlex also provides keyboard short-cuts that perform the same task as the redo command. Invoking the forward slash or the up arrow while in sp_ctrl will execute the previous command.