How to migrate from disconnected NSFs or PSTs to Exchange

In the MNE Notes Migration Manager (before you run the Data Migration Wizard):

The term phased migration or staged migration refers to the process of pre-migrating or pre-populating data to target Exchange mailboxes before the final cutover migration. The staged migration can occur across the bandwidth or, in many cases, be implemented in conjunction with the offline method previously described.

With a staged approach, most of the data can be pre-populated to the target mailboxes which reduces the volume of data that must be transferred during the final migration. Users remain active in Notes throughout the transition period, receiving and sending mail and managing their calendars in Notes while their older data is migrated to Exchange. After the older data is migrated, a smaller volume of remaining data can be migrated quickly so that a large numbers of users (or all users) can be migrated together within a shorter window. Since Migrator for Notes to Exchange migrates copies of Notes data (does not delete the originals), the older data is still available to users in Notes throughout the transition period. 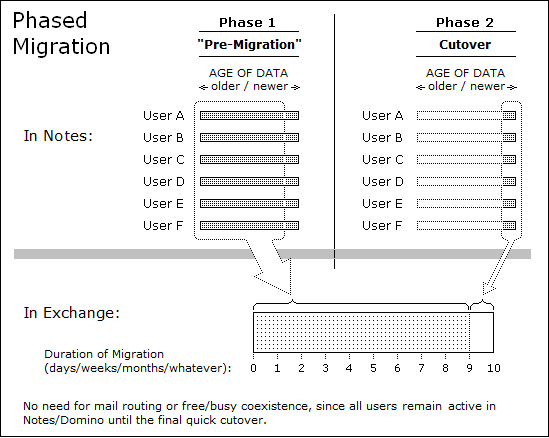 With a phased migration, it is beneficial to separate older mail from newer mail. You can accomplish this using one of two methods:

Migrator for Notes to Exchange also contains Smart Remigration technology so that previously migrated items are detected and not duplicated if they are inadvertently migrated again.

End-user communication is critical in a phased migration to ensure the users understand the migration schedules. Depending on the migration timing and configuration, modifications and deletions made in Notes between the migration events may not be reflected in Exchange after the final migration.

In a phased-migration, the Exchange accounts and mailboxes must be created to accept the migrated data before end users start using their Exchange accounts. Run the Migration Wizard at least twice for each user group:

The Self-Service Desktop Migrator (SSDM) offers a Silent Mode configuration. This optional configuration is used to minimize end user involvement when the SSDM is deployed, while maintaining the flexibility and other benefits of a distributed migration.

When Silent Mode is configured, the migration team configures the application in advance within the notesdtapp.ini file to determine what data will migrate, the target for each migrated data type, and the filters and other configuration elements for the migration.

The SSDM Silent Mode options are described in chapter 4 of this guide.

Migration to a proprietary Exchange