Migrator for Notes to Exchange can migrate to hosted Exchange services, typically to Microsoft Office 365 Exchange Online. Migration to Office 365 is similar to on-premises migrations, but there are key differences so the processes are described separately in this Scenarios Guide (chapters 2 and 3). 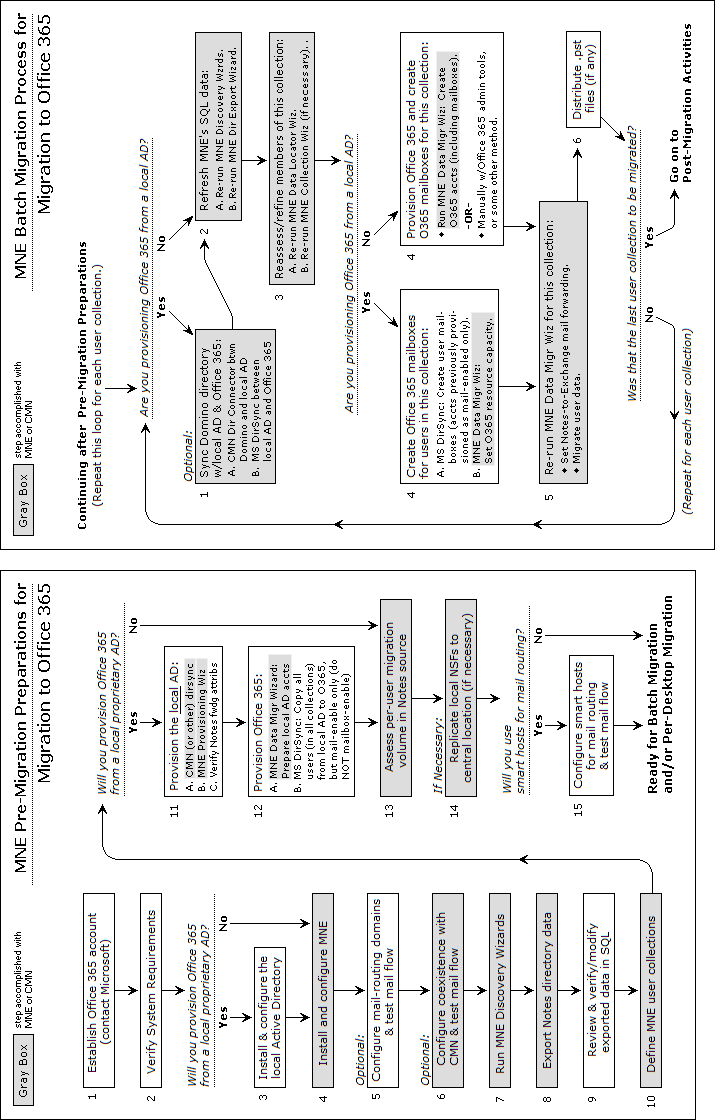 The account permissions required for migration to Office 365 are different from those required when migrating to proprietary Exchange since the hosted services are shared resources controlled by an external entity (Microsoft). Access to either target type is set at the mailbox level through Remote PowerShell, as described in the Migrator for Notes to Exchange Quick-Start Guide and Pre-Migration Planning Guide (see the System Requirements section in either book).

Office 365 introduced throttling on user connections which impacts migration performance. The throttling is a per-user limitation that reduces throughput after more than two connections by a single user (including the <MigrationAdmin> user). With previous versions of Exchange Online, migration throughputs of 3-5GB/hr per machine were common. But the Office 365 throttling reduces typical throughput to 500MB/hr or less per machine.

Quest recommends that you use multiple migration machines (or virtual machines) running in parallel to achieve the desired throughput when migrating to Office 365. Use a separate unique <MigrationAdmin> account for each machine, to bypass the Office 365 throttling. Also, each migration machine should be configured with fewer threads (2–4) to optimize throughput.

The Microsoft AD synchronization tool can provision Office 365 with object data from local AD by synchronizing the two directories. This provisioning method permits single sign-on or identity federation so users can access Office 365 services with the same credentials (user name and password) they use for local AD.

Migrator for Notes to Exchange can also manage mail routing throughout the project and perform several server-administrative tasks commonly associated with migrations.

If you do not have local Active Directory, you can use MNE to provision Office 365 directly from the Notes source and create the hosted mailboxes. Otherwise, you could provision a hosted AD manually using the Microsoft Office 365 admin portal. Many administrators use scripting to automate some portions of the process.

For most scenarios, inbound external (Internet) mail is not redirected to Office 365 until the last user has been migrated. We leave the MX record pointing to Notes throughout the entire transition period, and Migrator for Notes to Exchange can set Notes-to- Exchange forwarding for users as their collections are migrated. When the last user in the last collection is migrated, we update the MX record to redirect external inbound mail to the new hosted mailboxes.

If you want to keep your Notes environment running for a time after the migration, you should leave the Notes-to-Exchange forwarding in place, so any internal Notes mail is routed to the new hosted Exchange mailboxes.

Since inbound external mail is not routed to Office 365 until after all users have been migrated, Exchange-to-Notes forwarding is necessary only for internal mail from already-migrated Exchange users to not-yet-migrated Notes users. Mail routing in the Exchange-to-Notes direction requires mail-enabled objects in the hosted AD, but Exchange-to-Notes free/busy queries will not work if the Notes user already has an Exchange mailbox. (See the Important note in the preceding section for more information about this.)

If your organization wants both capabilities, you must use Microsoft AD Sync tool to provision Office 365 by directory synchronization from a local AD since that is the only method that lets you create mail-enabled objects and hosted mailboxes at different times. Provisioning from a local AD lets you create mail-enabled objects for all users in the Pre-Migration Preparations and to create mailboxes later during the Batch Migration Process—per user collection, prior to their migration.