In a typical migration to a local, proprietary Exchange environment:

A proprietary Exchange environment is one whose hardware and software are wholly under the control of the migrating organization. Ordinarily this is a local Exchange network—on the same premises as the GroupWise source, or at least near enough to use high-performance network cables for data transfer. But a proprietary Exchange server may reside at a location distant from the source (geographically and/or from a network perspective).
Microsoft’s Office 365 is a hosted Exchange platform (also known as "the cloud"). Cloud computing is a service model in which the hardware and software are owned and controlled by a third party (Microsoft). Microsoft then sells, as a service, access to disk space and the Exchange/Outlook software features.

Different combinations of target types and states of an existing local AD (if any) produce an array of migration scenarios. The scenarios listed below cover almost all variations to a GroupWise-to-Exchange migration, and the Migrator for GroupWise Scenarios Guide describes them all, with suggested process instructions:

The Scenarios Guide also describes three special-case scenarios, any of which would occur in combination with one of the above-listed scenarios:

This section briefly describes a typical migration scenario using Migrator for GroupWise, to migrate from Novell GroupWise 8.0.0 to a proprietary on-premises Exchange 2010 server. Details of this process appear in chapter 2 of the Migrator for GroupWise Scenarios Guide. In this scenario, an administrator performs the migrations for a series of user groups with no user input or interaction.

The pre-migration process for this scenario is illustrated in the accompanying flow chart (next page).

The process begins with existing user accounts and mailboxes on a GroupWise server. The destination Exchange server is set up on another machine and the migration process will require admin accounts on both servers. In this scenario we will use Quest Coexistence Manager for GroupWise (CMG) to facilitate directory, email and free/busy coexistence during the transition period. Microsoft Outlook is installed on users’ desktops. And of course the Migrator for GroupWise software must be installed on the admin’s migration server.

We run Migrator for GroupWise's Directory Exporter to read the GroupWise directory data and generate the data files required by other Quest applications. Next we install and run Quest Migrator for NDS to provision Active Directory with user and group data from NDS. And then we run Migrator for GroupWise’s AD Object Merge Tool, which reads one of the Directory Exporter’s data files to merge users’ GroupWise addresses into the AD objects provisioned by Quest Migrator for NDS, thus mail-enabling the objects. If the AD Object Merge Tool finds any Exchange contacts for users who also have AD accounts, the program merges the contact information into the corresponding accounts, and then deletes the contacts, to consolidate each such pair into a single mail-enabled security object per user. 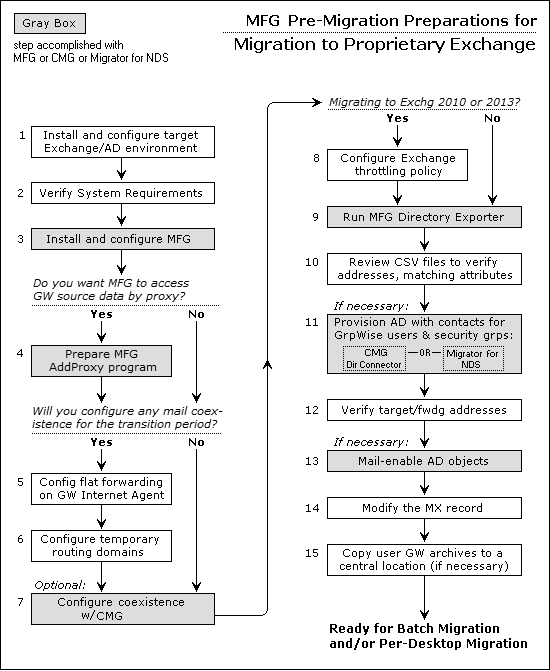 This process does not create mailboxes per se, but rather provisions new objects in Active Directory as mail-enabled accounts—associating users’ existing GroupWise addresses with their AD accounts to make mail routing possible. The new AD objects are said to be mail-enabled because Exchange can receive inbound (Internet) mail addressed to these users and immediately route it to the corresponding GroupWise mailboxes. Now that we have created mail-enabled AD accounts for all GroupWise users, we modify the MX record to direct external (Internet) mail to the Exchange environment.

Before the first users are migrated, we use a text editor to change a parameter in the gwmigapp.ini file so that a later directory synchronization will work properly.