Before you implement the WAN Link scenario, make sure you have set up replication as described earlier in this document.

Each InTrust server must have a fast and reliable connection with the SQL server where the InTrust configuration database resides. This solution lets you work with geographically dispersed InTrust Servers that are connected over a slow WAN link.

The configuration shown below has two InTrust Servers and two identical SQL Server computers with replicas of the InTrust configuration database that are synchronized to maintain consistency. 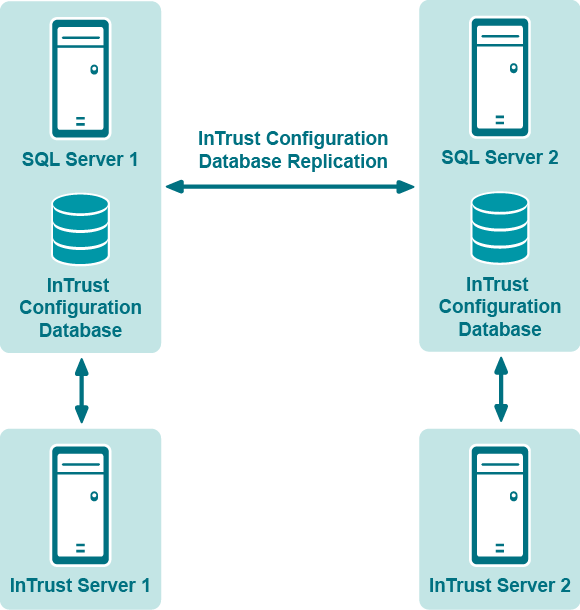 Install new InTrust Servers in the usual way. When prompted for location and name of the configuration database to use, specify the Subscriber SQL server and the name of the new (replicated) database. You may receive some errors such as:

These errors are safe to ignore. Click Ignore and continue with the setup procedure.

Upgrading InTrust organizations with the WAN link scenario implemented is specifically described in the Upgrade Guide.

Before you implement the scenario, make sure you have made the configuration changes described in Setting Up Replication.

Preparing InTrust for a Failover Scenario

Perform steps 1 to 3 from the Preparing InTrust for a Failover Scenario topic.

Then, for each of the InTrust servers, do the following:

When you have done this for all InTrust servers that participate in the failover configuration, commit your changes. Now, if the main configuration database goes offline, each of the servers will independently switch to the standby database.

A shared configuration is slightly easier to set up and modify.

Perform steps 1 to 3 from the Preparing InTrust for a Failover Scenario topic, and then do the following:

Now, if the main configuration database goes offline, each of the servers will independently switch to the standby database.