This procedure begins with the assumption that you have already reviewed the introductory chapter of this FBC Configuration Guide to Determine your FBC scenario. This chapter explains how to configure the FBC and the coexisting environments for F/B scenario #1, specified above.

Follow these steps, in order as presented here, to install and configure CMG’s F/B Connector for scenario #1:

The typical deployment of FBC components to two computers for this scenario (GW 7 or later via API Gateway, with Exchange 2007 or later and Outlook 2007 or later) is:

Other than an accommodation for multiple subdomains (see next subtopic below), no additional Exchange configuration is necessary for the FBC to work with an Exchange environment whose Outlook clients are all version 2007 or later, and where Exchange will connect with the FBC by Microsoft’s Autodiscover and EWS (without Exchange public folders). This Exchange-side scenario is illustrated here: 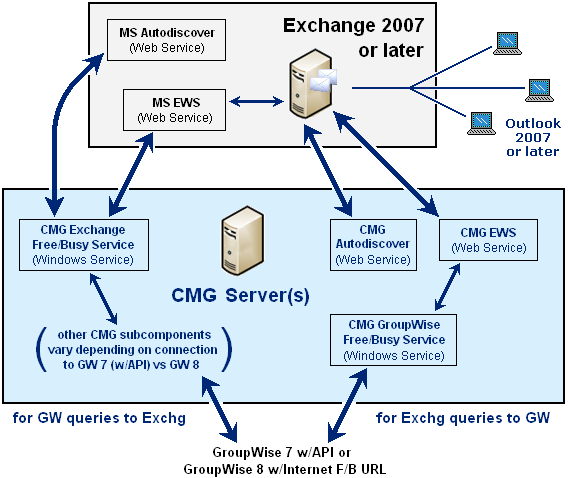 CMG’s Free/Busy Connector can facilitate the flow of free/busy information among multiple subdomains supported by both the Exchange and GroupWise servers. To support this scenario, run the Add-AvailabilityAddress­Space cmdlet on the Exchange server or Office 365 for each GroupWise SMTP domain supported.