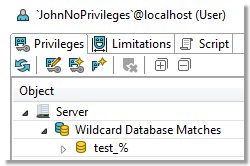 The main purpose of the grid is to resolve differences between database objects as a part of Schema Compare. You can also use other tools to filter the differences or mark them via context menu as:

There are two main types of differences:

Once you link objects as you wish, you can go through the differences and decide on how to resolve them.

The following table lists all possible resolution actions and their meanings:

This part of Schema Compare displays specific differences between the SQL code of two given database objects. It also allows you to export the SQL code of any of the two objects in various ways and you can also deploy changes based on the actions that you have used to resolve the differences.

Comparison Area has the following tabs:

In the Script Definition tab, differences can be resolved one by one with different actions.

To resolve differences between two objects in Script Definition

Once you resolve all the differences, you will probably want to deploy the changes. This can be done in two scopes:

To deploy changes of a single object