LiteSpeed® for SQL Server®, or LiteSpeed, is a fast and flexible backup and recovery solution that allows database administrators to easily maintain complete control over the backup and recovery process. LiteSpeed's low-impact, high-performance compression and encryption technology helps reduce storage costs and protect data, while maintaining a high level of recoverability.

The diagram below shows how the LiteSpeed components communicate to SQL Server to create a backup and how data gets into the local repository and then is pushed to the central repository. 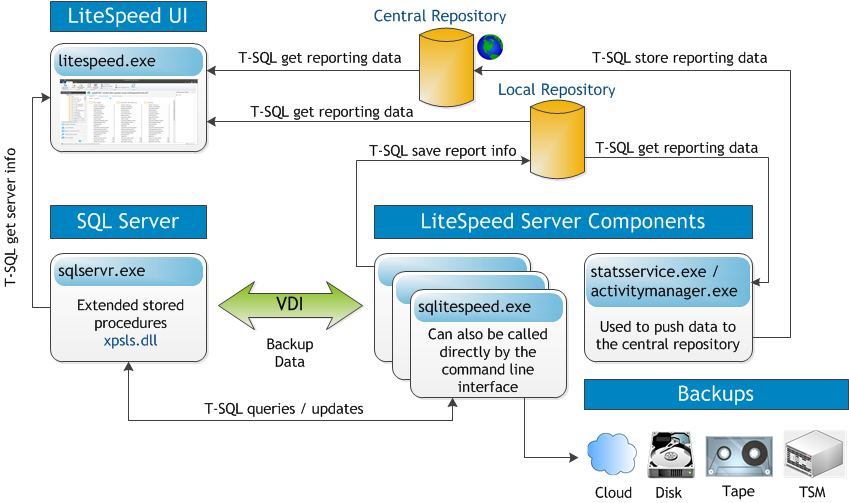 The core of LiteSpeed includes the LiteSpeed extended stored procedures, compression and encryption engines and other components that provide command-line access to the product's functionality and support the LiteSpeed UI Console.

You need to install LiteSpeed core components on all server instances where you want to benefit from LiteSpeed's fast and flexible backup and recovery solutions.

NOTE: If you do not install LiteSpeed core components on the server instances, you can only conduct native SQL Server backups.

LiteSpeed repositories collect and retain statistics on backup activity that occurs through LiteSpeed, including backups conducted from the LiteSpeed UI Console, command-line, or using the extended stored procedures. Repositories collect and present statistics for registered servers. They are not a list of servers. If a server goes offline you can use the central repository to find out information about it, such as the last time LiteSpeed backed up the server.

With the repositories, you can see backups that have failed or succeeded in the Backup Manager Overview tab. LiteSpeed displays the statistics for the server group, category, server, or database that you select in the navigation pane tree.